Hey everyone! Guess what! I published a new short story! 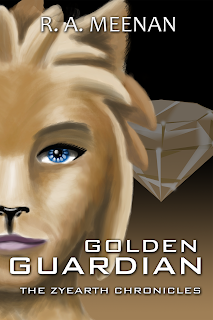 Izzy Gildspine is a member of the Defender Army, hoping to someday earn the title of Golden Guardian. But before she can do that, she must earn her Gem’s specialty magic... and time is running out. So when the Master Guardian himself approaches Izzy and fellow Defender Roscoe Wendigo with a means to activate her Gem, Izzy immediately takes him up on it. But Izzy quickly discovers that forcing a Gem’s activation is no walk in the park - and now her life is at stake, as well as Roscoe’s. Izzy must find the courage and strength to pass this trial and earn her place as a Golden Guardian... before the trial takes her life.

You can buy this story on Amazon here, or get the short story free here, for Kindle or Epub.

Not sure if you should check out this story? Let me give you a preview. Here's the first chapter of Golden Guardian!

R. A. Meenan time traveled with a mad man with a box to the Modern Era and was raised by anthropomorphic cats. After too many times setting her foster family’s cat tails on fire, she started ride-hoping on intergalactic military spacecraft in search of fodder for her science fiction and urban fantasy stories and the perfect cup of coffee. She’s an honorary ambassador for furry and anthropomorphic aliens. Also, space dragons.

She cares for a husband, Joe, and their four furry children (which are really cats) and one human child named after a video game character. She also cultivates a love of English in essay-writing haters and molds them into Actual Students and Lovers of English.

Her novels capture the imagination of time travelers, magic users, and nerds. Welcome to her nonsensical world.